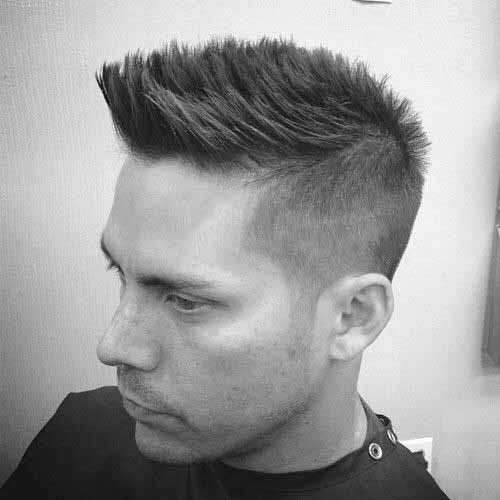 Get the funky Mohawk hairstyle

Mohawk hairstyles are a category of hairstyle that is a statement. The wearer wants to make sure that he stands out in a crowd. This is a unique hairstyle and not an easy one to carry. People who get spotted with this hairstyle are almost always standing out in a crowd. Apart from this the person can be one great attraction to the others around. Someone who can carry of a funky Mohawk hairstyle is definitely someone who is not afraid of being different. This definitely shows of the confidence of the person. This however is a hairstyle that is associated with people from entertainment industry or punks as they are so fondly called.

Origins of a Mohawk hairstyle

The origins of a Mohawk hairstyle can be traced to the Indians. These are the Native Americans that we are talking about. Men and women of the Native American community boast of beautiful long hair and they love the hair styled in different manner. They would then style their hair for special occasions to stand out. One of the hairstyles was the Mohawk hairstyles. This has now come as a fashion statement and nothing less. People who came to the American land saw these hairstyles and knew that it made them stand out. However the early settlers never tried any of these styles on their own, they let the future generations to try these styles. These were considered as eccentrics and not something settlers wanted to try.

People who were the Mohawk hairstyle

The people who are the widespread users of this hairstyles are most the Native Americans. They wear this to show off the style and their heritage. This is their pride and nothing that they should be ashamed of. The other categories of people who are wearing this style with ease are the punk rockers. Standing out in a crowd is important, more important for a band. There are many bands in the world and how does one stand out from the crowd? Well the first thing would be to have amazing music. However there are many bands that have good music to back them up, the next one on the list is the styles. People would need to be shocked into remembering who you are.

There are different manners in which a Mohawk can be styled. It can vary in length from short hair to long hair. You would need an amazing hair and also a good holding gel to maintain the Mohawk. The longer the hair the stronger the gel you need. In order for it to remain straight and spiked, the gel is the one that would help in achieving that level.

Share
Previous The all natural treatment for your hairs: Henna
Next How to get perfect wedding hair for a stunning bridal look