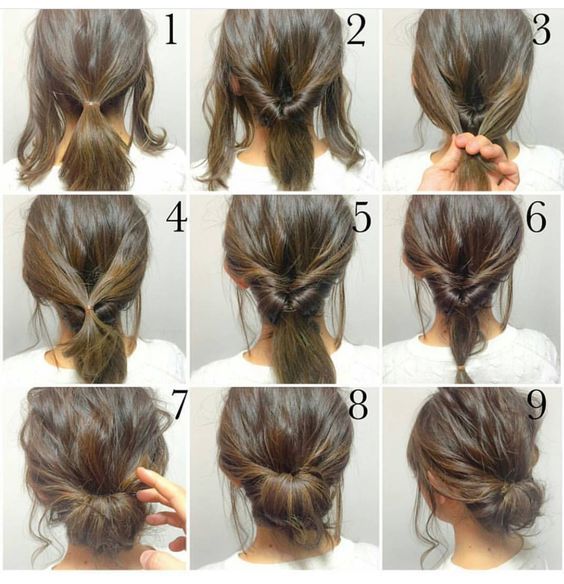 If your hair style skills are not like the way you want them to be or you have less time, you would love to use some of the basic yet beautiful hair styles to enhance your outlook significantly. And in order to help you out in this purpose there are a few easy hair updos. In order to look beautiful, you don’t have to spend hours on French braiding, fishtail braiding or precise styling. They are simple tips for your hair. You look beautiful with these cool hair updos as you look amazing.

The easier than it appears hair updo

You need to create a teased, loose bun using the bottom section of your hair and securing your hair with bobby hair pins. Then you have to take the top half portion of your hair and create an upside down ponytail which you can pin loosely in a bun. This gives you a true hairstyle look. Interesting part is that you won’t spend more than three minutes on getting this appearance.

Inside out ponytail bun

You can also save time with the inside out ponytail bun which another hair updo. You can simply put your hair into a high ponytail, and then push the bottom portion in the part of the elastic of the ponytail to create a loose upside down. It is also called the tuck effect. Now you have to pull it up at the very top with a little tug and secure things. It is done.

Twist around side braid

The next hair updo does keep your hair out of your face and that too, in less than five minutes. It is a creative ponytail which will earn fans for you asking secrets of such a ponytail. You have to pull your hair in a side ponytail, and then split the ponytail into two and pull them through the opening space right before the ponytail starts. It will become an upside down ponytail. You have to keep doing this to create multiple upside ponytails throughout the whole entire head of hair. As a result you get the twisted braid effect.

Share
Previous Look gorgeous every day with easy hairstyles for medium length hair
Next A layered hairstyles: Haircut that makes you styled